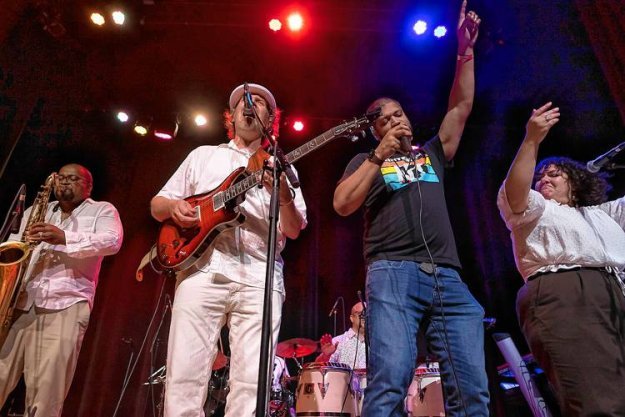 By SHERYL HUNTER
For the Recorder

Hurricane Fiona recently ravaged Puerto Rico, yet another huge blow for the island that was hit hard by Hurricane Maria in 2017 and an earthquake in 2019. Fiona left hundreds of thousands without power and water, while some communities also dealt with massive flooding. It will be some time before experts grasp the full scale of all the damage.

When musician Matthew King, the leader of the world music band TapRoots, heard of the devastation that Puerto Rico residents had experienced, he knew that he had to do something. King, who has friends and adopted family living on the island, decided to turn the show his band had already scheduled for Saturday, Oct. 8 at Hawks & Reed Performing Arts Center in Greenfield, into a benefit concert for hurricane relief.

This night will be special in that it will include live painting, vendors, and in addition to TapRoots performing, will also include performances by the roots-reggae-rock band Los Sugar Kings and the dance group Bomba De Aqui.

“Los Sugar Kings are some of my oldest friends and are a great band based out of the Boston area,” King said. “I initially brought them on board for this show just to have a show in town with them, and introduce them to a western Massachusetts audience.

“This show has been planned for a few months now, but then when Fiona ripped through the island, I was wondering if anything was being done out here to help with the relief effort, and decided to turn the concert into a fundraising benefit,” King explained.

King said he would donate everything he makes in tickets and merchandise to hurricane relief. The other performers on the lineup have also committed to lending a hand toward relief efforts.

“When these kinds of travesties happen, it is easy for us up here in Massachusetts not to know how exactly to respond, though so many would like to help,” King said. “So many people in this area have family on the island, and I felt that this show would be a good way to send some help to those in need in Puerto Rico.”

Another group that was quick to get involved was BrendalizCepeda and the dance and music company she oversees called Bomba De Aqui. This group performs and teaches Afro-Puerto Rican traditions throughout western Massachusetts and the central Connecticut area.

King has a history with BrendalizCepeda and Bomba De Aqui that dates back to the days that he was teaching at Pioneer Valley Performing Arts (PVPA) public charter school in South Hadley, a position that he held for 17 years before leaving last year to focus on his music. The group, which provides workshops at schools and other community venues, provides education about Afro-Puerto Rican music and arts.

“I would bring them to PVPA to teach these traditional rhythms and dances to the kids, and once this show turned into a fundraiser, they were the first people I called to be a part of it,” explained King about his relationship to the group. “Coming from a long lineage of Afro-Rican culture-keepers, they will bring some of the true flavor of the island to the show.”

King has been in touch with friends on the island who have provided him with information about what kind of help was needed.

“The folks I know there are doing alright, though still have no power,” King said. “I have been in touch with some grassroots community organizations as well. They are doing some incredible work getting people food, medical supplies and other essentials.”

One of the friends he was in touch with has spoken with a couple of different organizations that are doing great work directly with the people in and around Ponce who were hardest hit. “She will be helping to put together a short video of the work being done there, including interviews with community leaders, and we hope to have that ready to show at the benefit as well,” King said.

As for the music, expect this to be a night of exciting Latin-inspired sounds. TapRoots is a musically adventurous and lyrically inspiring group whose unique brand of Latin-prog-funk is highly danceable. It’s music that incorporates elements of rock, soul, reggae, salsa, soul, hip-hop, samba, folkloric rhythms and beyond to create a refreshingly new sound. Last month the band hosted a show at the Shea Theater Arts Center in Turners Falls where they previewed material off their upcoming release “The Resonance Within.” Look for that album to be released later this year but you can expect to hear some of the material at this show and some old favorites.

Los Sugar King (named after a Cuban baseball team) plays a rocking music style that pulls from various influences including Afro-Cuban son, salsa and rumba-flamenca. They sing songs in Spanish and English. Their music is passionate and lively and they will surely win over new fans with their first show ever at Hawks & Reed.

When you factor in the dancing of Bomba De Aqui with the music of Los Sugar Kings and TapRoots, this should make for a special night that will help those in need in Puerto Rico. So come help out and don’t forget your dancing shoes!

Advance tickets are only $15 but you can donate more if you choose. For advanced tickets, visit hawksandreed.com. Tickets will also be available at the door.