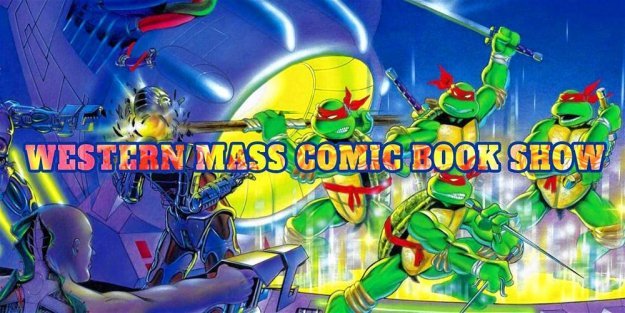 Mark your calendars for a great event featuring over 40 tables of comic books and artwork as the Western Massachusetts Comic Book Show returns for its second-ever show on Sunday, Oct. 17.

The Western Massachusetts Comic Book Show returns on Sunday, Oct. 17 at the Hawks and Reed Performing Arts Center in Greenfield from 10 a.m. to 4 p.m. Admission costs $5, and kids 12-years-old and under are admitted for free. Tickets can be purchased at the door, or online through Eventbrite ahead of time. Masks are required per Greenfield board of health mandate.

The event is organized by 34-year-old Kristopher “Kit” Henry. He and his wife, Kristen Henry, who live in Turners Falls, co-own and operate Amazing Comics. Under the title, the pair attend regional comic book shows where they sell and trade from their personal collection which includes issues dating back to the 1950s, “but issues issues from the ’50s and ’60s are getting harder and harder to find,” Henry said.

The original Western Massachusetts Comic Book show in 2019 was met with immediate success.

“We welcomed over 500 attendees through the door that first year,” said organizer Kristopher “Kit” Henry.

While the show could not be held in 2020 due to planning complications from ongoing COVID-19 pandemic, Henry said they are ready to return with a multitude of featured local artists. With continued enthusiastic support, the Western Massachusetts Comic Book even plans to expand to a biannual event next year. Henry said they have already booked vendors and guests for shows for May 29 and Oct. 16, 2022.

Comic book fans growing up in the ’80s and ’90s are sure to remember the Teenage Mutant Ninja Turtles, but they may not know the creators are native to the Pioneer Valley. Once struggling artists living in Northampton, Kevin B. Eastman and Peter Laird created the Teenage Mutant Ninja Turtles in 1983. The characters have stayed at the forefront of pop-culture, having been handled by different creatives across comics, toys, television and movies for the last 38 years.

Returning this year is Jim Lawson who worked with Laird and Eastman for over two decades after being introduced by “a friend of a friend”  — kick-starting a 35-year-career in comics. He connected with the creators after graduating art school and worked for them at the Mirage Studios office which opened in Northampton in 1983. Lawson would spend 25 years with Mirage Studios as a writer and artist on the original black and white Turtles comic.

“The biggest ones in the country, in San Diego, I remember walking in there just thinking — here I am, involved with the biggest thing in the comics world at the time…”

Born and raised in a tiny town in northwestern Connecticut, Lawson says he always knew that he wanted to become an artist and that he had the hopeful, yet somewhat unrealistic goal for himself to make a living drawing pictures.

“I was the kid in elementary school sitting in the back row with his head down drawing on a piece of paper,” Lawson said. “It was never doubtful for me, I’ve always known what I wanted to do.”

Even after getting a job with Mirage Studios, he kept a part-time job in Turners Falls for a year or so until his comic book work grew and he was making enough to commit full-time to writing and illustrating. He recalled when the Rat King, an original character he created for the Turtles comics, was turned into an action figure — a badge of honor among comic creators.

In the early days we were kind of like rock stars when we would go to comic book shows.

“It’s just kind of unreal, this thing I had an intimate involvement with kind of become a cultural icon,” Lawson said of the Turtles.

When asked what drew people to the Turtles to make it such a craze, Lawson said this was the topic of a panel at another comic show last month and he had a couple of theories. He said the series attracted a lot of female fans, transcending some assumed gender lines of that time to reach a wider audience. Additionally, he said the Turtles characters were viewed as “outsiders” hiding in the sewers, and the stories had a family aspect that appealed to readers.

Lawson’s time working on the title ended in 2009 when the Turtles franchise was sold and the studio went dormant. At this time Lawson began to pursue a solo freelance career publishing his own comics and funding projects through kickstarter campaigns.

Today, Lawson’s many self-published works include, among others, Paleo: “Tales of the Late Cretaceous,” “A Walk Through Dinosaurland,” “Dragonfly,” “Dinosaur Head Cat” and “Jim Lawson’s Dinosaurs Coloring Book,” and his upcoming book “The Sordid Land.”

The Western Massachusetts Comic Book show will be one of several that Lawson will attend in the New England region this year. He said he enjoys attending, meeting fans and seeing members of the comic book community year after year.

Another featured artists at this Sunday’s show is Steve Murphy, a comic book writer who has been nominated for both the Harvey and Eisner Awards. He has also written Teenage Mutant Ninja Turtles comics and animation.

Rolling Stone magazine includes his The Puma Blues among its list of “the 50 greatest graphic novels of all time.” Murphy is currently writing his first non-fiction graphic novel in partnership with Holyoke native Andrew Del Valle.

Del Valle has been drawing for as long as he could remember. According to a biography on the event page, he received his Bachelors in Fine Arts with a focus in painting and drawing at UMass Amherst, and uses both disciplines within the digital format. Using programs like Adobe Photoshop and Manga Studio exe (Clip Studio Paint), the digital medium provides a limitless array of choices and artistic directions.

Other local, independent comic book artists include Tanner T Ogle, a Northampton resident who has been “active” in the artist community since 2018 and has self-published two full-length graphic novels. These include “The Cross, The Mother” with writer Alexander Leger-Smalls, and “Do Not Enter” which he wrote and illustrated. The first issue of his new series “Murph” was released in July 2021.

Casey Kruk, of Kruked Art, is an independent, self-taught artist. Born and raised in Western Massachusetts, Kruk’s influences include Bruce Timm, J. Scott Campbell, and Michael Turner. Her passions are her children, illustrating and comics.

Hailing from South Deerfield, Gary Smith will return to this year’s show. Smith is a 1991 graduate of the Joe Kubert School who’s resume includes work for Valiant/Acclaim comics and Canson Paper Company’s “How to Draw Manga” line of comic book papers. Smith currently produces two comic books: The Doe-Nild and Tales of J’lleen.

Marvel Comics Colorist Bob Sharen will join this year’s show. From 1978-2001, Sharen was a colorist for Marvel Comics. During this time he worked on almost every Marvel title, mostly on long runs of GI Joe, Alien Legion, and the various Spider-Man titles.

Since departing from Marvel, Sharen has worked full-time on color commissions and stained glass work.

There is on-street parking on Main Street in Greenfield, and public lot parking is free on Sundays. The Olive Street Parking Garage is conveniently located across the street from Hawks and Reed Performing Arts Center, and parking rates are 25 cents per hour on Sundays.

More information on the event, including brief biographies of participating artists, can be found online at facebook.com/westernmasscomicshow/. Interested vendors may be placed on a waiting list by emailing westernmasscomicshow@gmail.com.

Local sponsors for the 2021 Western Massachusetts Comic Book Show include His And Hers Comics and Antique Revival and Collectibles.