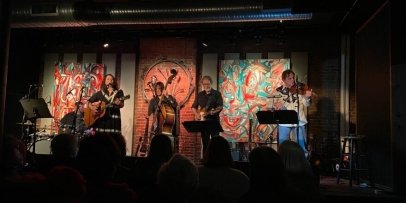 In early March, Hawks and Reed, an intimate music venue in Greenfield, Massachusetts, was packed for a Dolly Parton tribute concert starring several local musicians and a house band.

Performer Kris Delmhorst chose the tune “Two Doors Down” as a commentary on the moment we’re in.

“It’s about when the neighbors are having a party,” Delmhorst told the audience. “And it’s a little about FOMO – fear of missing out – and well, everyone in the entire world has sort of had FOMO for last couple years. I just love the idea of joining the party. And it’s a moment when some of us are starting to join the party.

At the same concert, several performers laughed about being out of practice on stage, including mandolin player and emcee Chris Brashears, who stumbled a bit on his audience banter.

But for the most part, performers and audience members were giddy, finally enjoying live music together — in person, not on a screen — after a couple fitful years of closed venues, canceled concerts, and temporary hopes dashed by COVID-19 variants.

“The challenge for us has been having any sort of consistency,” said Jim Olsen, who runs Signature Sounds, a record label that also books concerts at several western Massachusetts venues, including the Parlor Room in Northampton, the Shea Theater in Turners Falls, and Hawks and Reed.

“We work mostly with touring artists who plan their tours months in advance,” he said, “and obviously that’s been so hard to do.”

Since the pandemic started, Olsen said, they’ve scheduled and canceled multiple concerts multiple times. Some groups have retired or broken up during that period.

Olsen said his company managed to stay afloat with a combination of COVID-relief grants, live-stream donations, and their recording income. He’s hoping live music will start to pay for itself again.

“We tend not now to measure success on on attendance,” Olsen said. “It’s more, you know, can we pull the show off and can we have a great performance?”

Olsen said they’ve had to adjust how they pay performers. Often, instead of a guaranteed minimum, he’ll offer a percentage of ticket sales.

”We’re producing fewer shows in general and not taking as many chances on newer artists that might not fill the room,” he said.

And yet, Olsen pointed out that most music venues in western Massachusetts have not closed permanently and some new ones have even opened.

For instance, in downtown Springfield, a new restaurant and jazz lounge called Dewey’s opened in June of 2021.

“A lot of people called me crazy for opening during the pandemic,” said Kenny Lumpkin, who co-owns Dewey’s. “But I figured we’re social beings and being locked up for a year — or, at least, it felt like locked up — the demand was there. And on the flip side of that, a lot of musicians were also out of employment for a year, so we wanted to really make sure that we were supporting them, as well.”

Lumpkin said turnout has gone up and down with COVID surges and some months the restaurant has to cut back on live music to save money. But for the most part, he said, business is good.

“The biggest issue we’ve had operating during the pandemic has been the supply chain, whether it’s getting food or spirits, and that has been our biggest headache,” he said.

One venue that almost closed for good was Gateway City Arts in Holyoke. Lori Divine Hudson and Vitek Kruta opened the waterfront arts complex in 2012, bringing in local and touring acts.

They closed early in the pandemic — temporarily, they thought — making use of donations and government grants. But they decided they couldn’t afford to reopen for concerts at the scale they wanted.

“Emotionally, it was very difficult,” said Divine Hudson. “This was our baby. And we invested a lot of money and time and tears.”

But then they were thrown a lifeline. The concert booking company, DSP Shows, offered to take over Gateway’s music hall, and renamed it Race Street Live. That way, Gateway City Arts could maintain food service and smaller arts spaces.

Neil Robinson of DSP Shows has worked at western Massachusetts music venues for 20 years and trusted in the region’s musical appetite.

“When there’s a band on stage and they’re clicking, and they’re playing well together, and that joy, that energy, extends out in the audience, it’s just an experience that you can’t get online,” Robinson said.

Still, the new venture got off to a rocky start. When they put on concerts last summer and fall, as the delta and omicron variants emerged, not only did ticket sales drop off but up to a quarter of ticket holders just didn’t show up.

“That’s 25% of the food and beverage that is not being sold as well,” said John Sanders, also of DSP Shows. “And the same thing can be said for the artists who rely on merchandise sales.”

But now they’re booking acts regularly. A recent concert for indie musician Lucy Dakus was packed with a vaccinated crowd — that’s a requirement. People were standing practically on top of each other.

“I can see the stage just fine from here even though I’m very short,” said Christina DeAngelis of Russell, Massachusetts, who was lurking near the back of the hall, trying with some futility to keep social distance.

This was her first indoor concert since the pandemic began. Masks were required at the concert, although now they’re just strongly encouraged.

“This is the first show where I feel like this looks like an old show,” said DeAngelis. “This is exactly the kind of crowd in space that I’m used to, except we’re all wearing masks and it’s a little weird, but I feel okay about it.”

“It’s just the tip of the iceberg,” said David Meininger of Northampton. “I’ve got tickets for three more concerts coming up. So this is just like all this pent-up two-year demand for me.”

Pent-up demand is what the concert promoters are counting on as the pandemic’s next uncertain phase gets underway. Although the Lucy Dakus concert was sold out, John Sanders said he’s expecting a gradual renaissance.

“The music business is not something that you snap your fingers and overnight everything is going to be back to normal,” Sanders said, “because there’s going to be a ramp-up time. It takes time to put tours together and to get things down the road. And it’s really, I think, a six-month lead time.”

Concert promoters say they expect good turnout in the spring and summer when many events can be held outdoors. Signature Sounds is counting on its annual Green River Festival, which was canceled in 2020 but a success last summer.

Just before the pandemic, Signature Sounds had been on the verge of buying a new building in Northampton to expand its indoor concert series, but Olsen said they pulled out of the deal when things started shutting down.

“I’m not saying we’ll never expand or we’ll never try anything new,” Olsen said. “But for right now, just the fact that we’ve been able to maintain what we do feels like a win.”