The Pangeans at Hawks and Reed 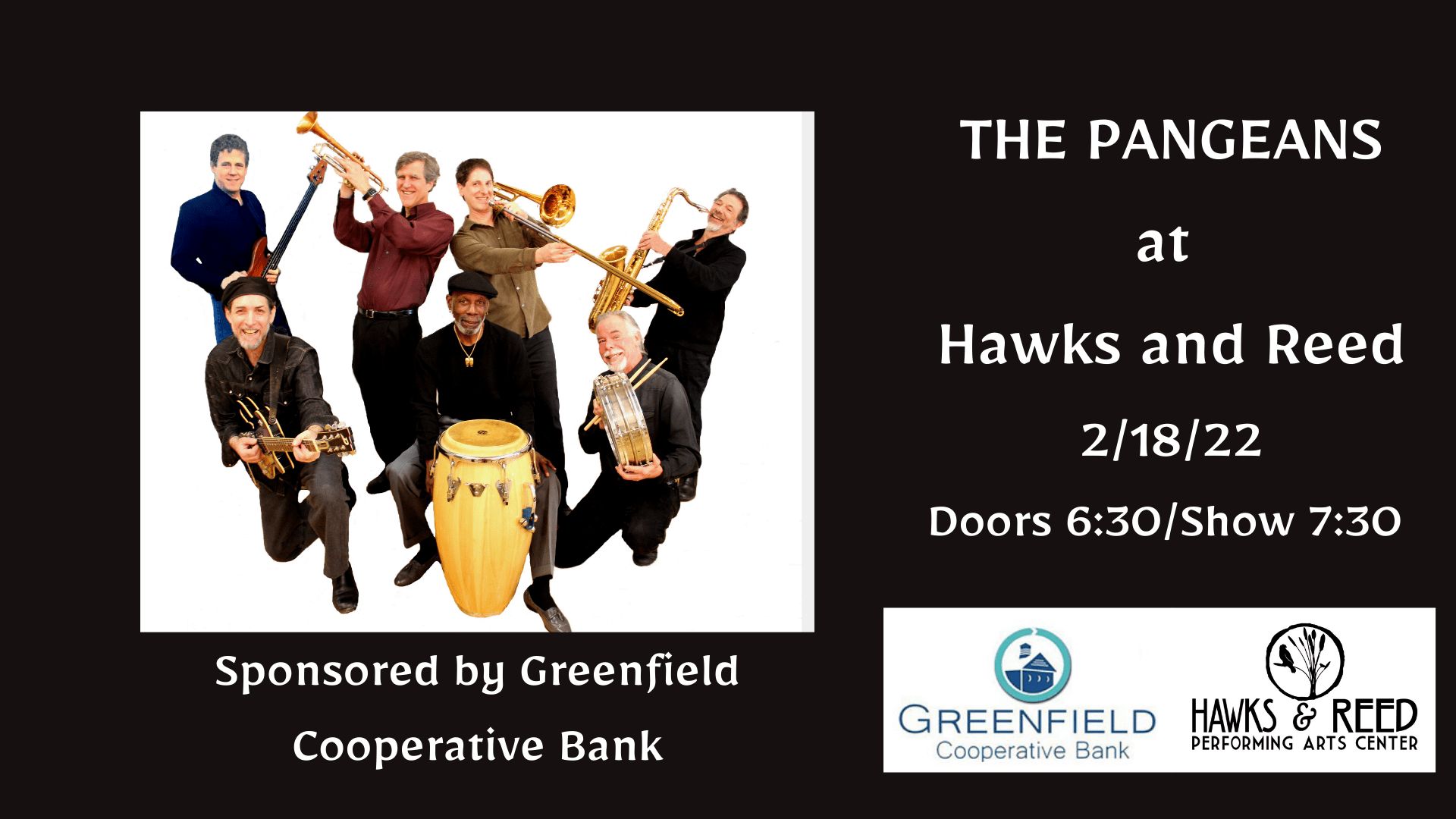 The Pangeans at Hawks and Reed

Pangaea (Pan je ‘ a), n: The landmass that existed when all continents present-day were joined, from about 300 to 200 million years ago.

THE PANGEANS are a group of seven musicians performing Latin Jazz, Samba, Calypso, Soca, Reggae, Funk and Afro-Beat. The group performs original compositions based on traditional rhythms as well as compositions by Abdullah Ibrahim (Dollar Brand), Herbie Hancock, Fela Kuti and others. If you like to dance and/or listen to World Music, you’ll love THE PANGEANS!

JIM VOGEL (tenor saxophone, soprano saxophone, percussion, composer) has performed and recorded with New Horizon (Reggae), New Roots (Reggae), the Berkshire Bateria Escola de Samba (Brazilian). Jim was a founding member of the acclaimed group Who’s Kidding Who? (Funk), with one release on Bullet Records. He currently leads his own Jazz group and performs with Lucky Seven (Caribbean Ska).
DON ANDERSON (trumpet, flugelhorn) has played with numerous groups in the Northeast, including Right Time (World Beat), Dr. Burma (R&B), Hip Socket (R&B), New England Transcendental Brass Band, Smokin’ Joe and the Henchmen (R&B/Soul), Moonlight Davis (soul), Vermont Jazz Center Big Band, Compaq Big Band, Four N More (jazz), O-Tones Big Band (swing), Paule Kelley (pop), A Team (rock), Casual Sextet (jazz/funk), Lip Service (jazz), Jim’s Big Ego (pop), JP Tropicale (afro/caribbean). He currently performs with the Julian Gerstin Sextet, the Green Street Quintet, the Jazz Marauders and the Bok Choy Trio.
STEVE CROW (electric guitar) has been with the group since 2008. He leads his own group Crow’s Rebellion. He has performed with Kevin So (original) and Ras Moon (Reggae), and other regional bands. Originally from Long Island, Steve moved to Boston to attend Berklee College of Music in the early 1980s, then later came to live in Western MA.
BRUCE DOBBINS (congas, Latin and African percussion) At age 19, Bruce met his spiritual and musical godfather Mongo Santamaria, who took him on a musical journey through the world of Afro-Cuban rhythms. Shortly after that, Bruce met and played with the world-renowned percussionist Babatunde Olatunji. Bruce is particularly well-versed in folkloric Afro-Cuban percussion styles (Bata, Bembe, etc.) and truly has a style of his own that he brings to The Pangeans. He has also been performing for many years with the band Blue Streak (led by guitarist John Sheldon), and with the Berkshire Bateria Escola de Samba, and many other bands throughout New England and New York.
RUDI WEEKS (electric bass) has performed with over thirty ensembles covering almost every style of music. These groups including such 60s greats as The Contours, The Crests, and Ronnie Spector, and Folk and Bluegrass legends Tom Paxton and Tony Trischka. He also toured internationally with the Dirty Dancing Concert Tour. He served as a faculty member at the University of Massachusetts Performing Arts Division and as an adjunct bass faculty member for Amherst College. He currently teaches at Holyoke Community College Music Department, Downtown Sounds in Northampton MA, Guitar Center in West Springfield and at his home.

JEFF HINRICHS (drums) has been in demand as part of the Pioneer Valley music scene since 1978. One of the rare drummers equally versed on the drum set as well as hand percussion, he has performed with many area top bands over the years. He decided to be a musician when, like so many of his generation, he saw the Beatles on the Ed Sullivan show and decided that music would be his path. He has studied with an impressive list of the world’s best percussionists, and has earned a BA degree in Ethnomusicology from UMASS Amherst. In addition to The Pangeans, currently he can be found working with Dicey Riley, The Kitchen Party, and the B3s.