Minstrels in the Gallery – a Live Tribute to Classic Jethro Tull 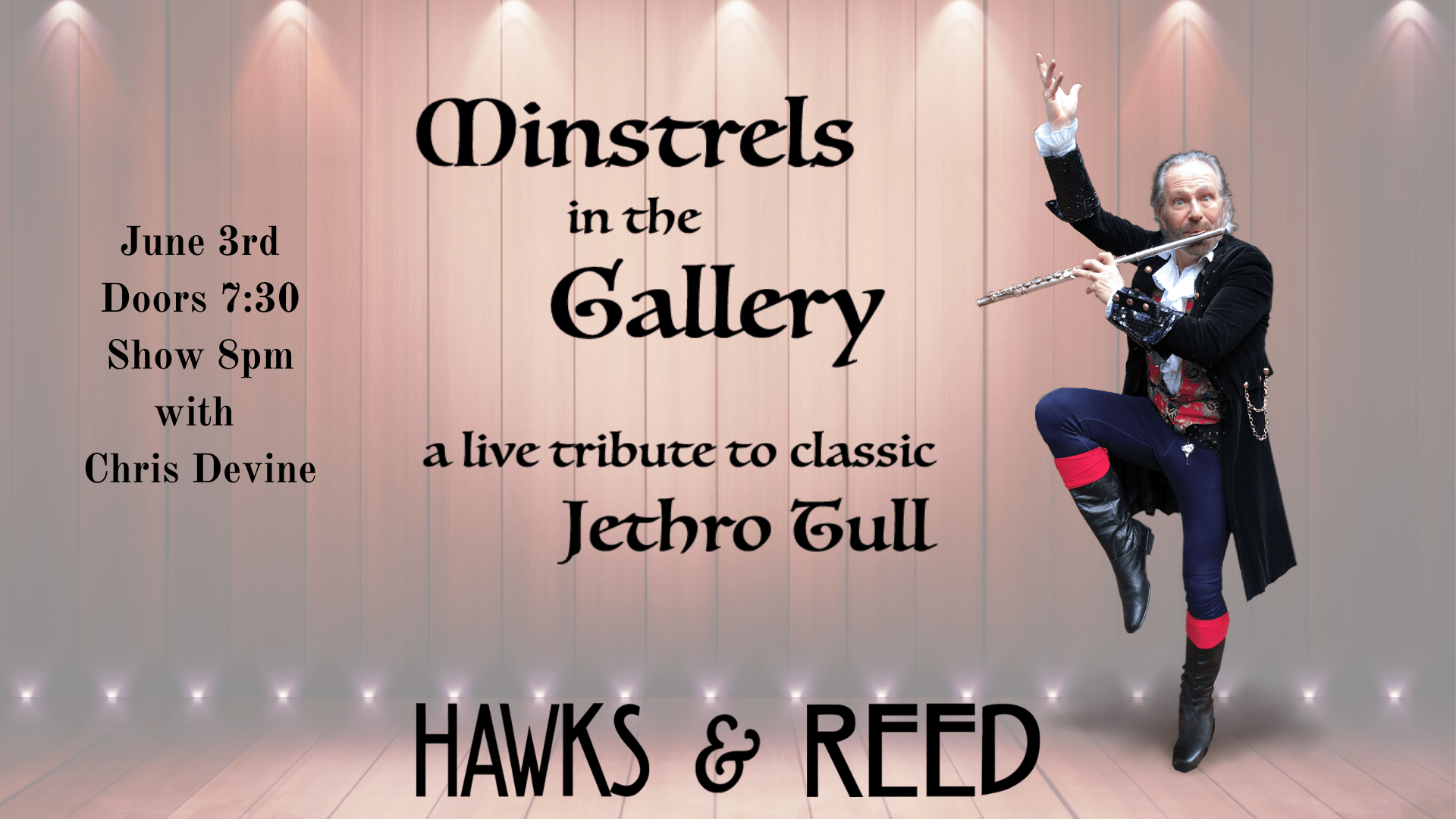 Minstrels in the Gallery – a Live Tribute to Classic Jethro Tull

Valley musician and multi-instrumentalist Chris Devine and his band of merry men bring a tribute to the classic music of British rock giants Ian Anderson and Jethro Tull, “Minstrels In The Gallery”, to Hawks and Reed on Friday, June 3.

Performing on flute, acoustic and electric guitar, mandolin, violin, alto sax and vocals, Devine and his band will present a concert featuring songs from what Devine calls “the real glory days of the band, 1969-1977, when Tull packed arenas around the world with their inimitable mix of progressive rock and British folk flavored with classical influences and a bit of American blues…with a brilliant and iconic frontman in Ian Anderson, whose often grandiose presentation was always flavored with self-deprecating humor.”

Devine is known to local audiences through his long tenure as ‘Dr. Divine’ in the comedy rock act The Bobby Darling Show, his longtime partnership with Greenfield guitarist and banjoist Michael Nix in the classical realm with both The Devine-Nix Duo and the Pioneer Consort, and through many recent appearances with Celtic harpist and songwriter Rosemary Caine. He’s worked as a session musician for numerous jazz, rock, classical and folk artists and as a commercial composer.

An actor as well, he has been seen in featured roles with Arena Civic Theatre as musical director and Pontius Pilate in “Jesus Christ Superstar”, two productions each with Greenfield’s Silverthorne Theatre and GCC Theatre (including their recent production of ‘The Elephant Man’ staged at Hawks and Reed) and as Prospero, Claudius, Polonius and Feste with Hampshire Shakespeare Company in Amherst and Shakespeare Stage in Northampton.

Though accomplished as a rock guitarist in his teens, Devine became enamored of the violin through the music of French jazz violinist Jean-Luc Ponty and focused on classical violin studies in his early 20’s. That led to a degree in classical performance from UMass under the tutelage of virtuoso Julian Olevsky and an unforeseen pivot in his musical journey. A parallel musical path developed for him, as he remained true to his rock and fusion-jazz passions while also working and performing as a classical violinist and violist in orchestras, quartets, and recitals.

The flute, too, took a role in his late teens when he bought one on a whim during a visit to a music shop. “I was a fairly accomplished trumpet player as a kid, and played the recorder well, and so I knew how to breathe properly, form an embouchure, and practice efficiently. I was already a Tull nut by then, and in fairly short time I could cover most of Ian’s recorded parts and progressed to playing Bach flute sonatas within a couple of years.”

No stranger to British rock royalty of the 1970’s, from 2000 to 2002 he was a featured soloist in Blackmore’s Night, starring guitar icon Ritchie Blackmore of Deep Purple, touring Europe and Russia multiple times and appearing on two of their CDs. Blackmore and Anderson have been friends since their heydays and Anderson recorded a guest solo on one of their songs.

Through that association Devine enjoyed an email exchange with Anderson, his teenage hero. “Unfortunately I never got to meet him in person- a backstage introduction had to be cancelled due to illness- but he was personable and as ever, very funny.”

Anderson is hitting the road this year with a new album, “The Zealot Gene”, after the COVID-19 epidemic forced an industry-wide hiatus on artists of all levels. “He’s 74, and not leaping around the way he used to, but he’s playing better than ever, and still true to the style that he originated. There’s no artist in the entire rock genre who truly owns an instrument as he does. You simply cannot incorporate a flute in a rock context and not invite the immediate comparison. I can’t think of any other instrumentalist living or dead that could be said about.”

Devine performed a tribute set to Tull in the mid 1980’s and so Friday’s concert is a revival of sorts. “There’s a number of people who know me only as a Bach maven – I play all of his solo repertoire for violin and cello from memory – or a guest artist, a musical clown, or as an actor, and have no idea I’m a rocker to the core. I’m looking forward to sharing my joy in this youthful inspiration that was a big part of my formative years as a musician. The band is super-skilled, tight, and we’re ready to play a first-rate show in the best room in town.”

Tickets are $15 in advance and $20 at the door. Versatile guitarist and singer John Cantalini will open the show at 8 PM.