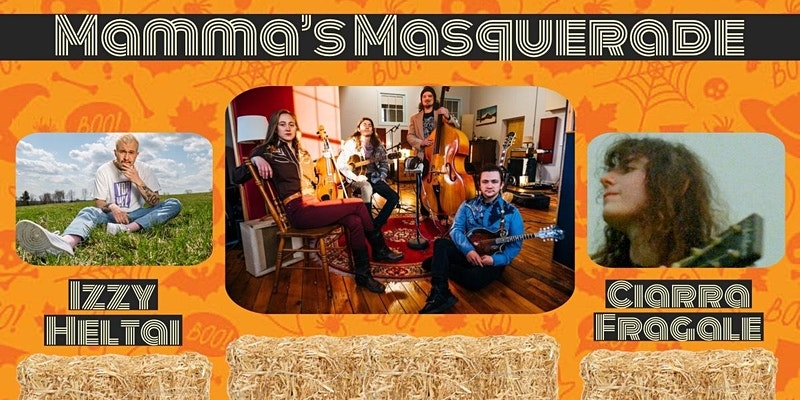 A Night of Sweet Music From The Valleys Best!

Mamma’s Marmalade
draws from acoustic traditions spanning Appalachia and the Ozarks to craft a sound that manages to be at once familiar and definitively fresh. Honeyed harmonies buoy the classic high-lonesome croon of lead vocalist Lily Sexton, sailing above a whirling reel of steel string sonics and pop melody. Mamma’s Marmalade started in a UMass dorm room when Sexton (fiddle) and Mitch Bordage (mandolin) bonded over bluegrass. Tenacious flatpicker Sean Davis caught their attention at an open mic in 2016, and the band released their debut album Goodbye, Black Velvet, the following summer. In 2019 the band released their sophomore LP Rockabee Fields. Following Rockabee Fields they welcomed bassist Dan Bisson to their musical family. They’ve spent years honing improv skills, instrumental tone, harmony arranging, rhythm and energy to create a compelling live show. Regardless of their relative virtuosity at the beginning of their adventure, today Mamma’s Marmalade is composed of a group of artists that know how to work together as one. Their third studio album, Rabbit Analog, will be released August 2021.

Ciarra Fragale
is an indie pop singer/songwriter, producer, and actor from NY’s Hudson Valley. By blending the nostalgic traditions of songwriting with unique new-wave sensibilities, she creates a refreshing sound all her own. In addition to making her own music, Ciarra has also composed many works for theater and film.

Izzy Heltai
Walking the seam between confessional Americana and whimsical bedroom rock, Izzy Heltai is as nimble as he is grounded. In “Day Plan (5 Songs Written 4 the End of the World)”, Izzy highlights the connective tissue between himself, everything around him, and everything within him. Sonically unpretentious and lyrically relatable, his music is like a conversation with a best friend over a cigarette on the back porch — the moment of clarity you didn’t know you needed. Izzy Heltai’s roots sprout from folk music – if not from the genre itself, from the tireless grind of DIY touring that often accompanies it. And then, a shift. This “nose-to-the-grindstone” devotion deviated into submerging self-exploration; a recalibration that fearlessly touches and names the gritty, unseen things that were hidden in the corners of his mind. While introspection can lead to emotional exacerbation, Izzy comfortably bares himself to others; putting these realizations to candid lyrics, infectious melodies, and simple instrumentation. Izzy sings exactly what he experiences in a way that feels like he willingly converted the windows in his one bedroom Massachusetts apartment to two-way mirrors — welcoming us inside the many feelings that rise, crest and fall as he goes about his day plan.