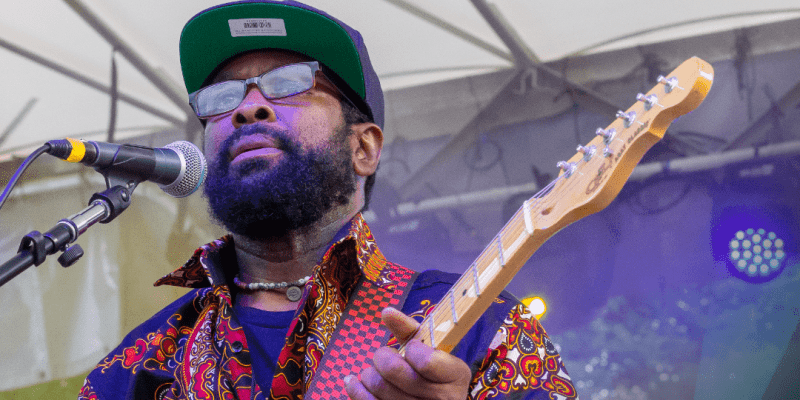 When it comes to afrobeat, seeing Kaleta onstage is like going back to the source. Benin-born Leon Ligan-Majek (a.k.a. Kaleta) got his start touring with King Sunny Ade, and a few years later Fela Kuti came calling. He went on to tour with the Egypt 80s for over a decade before joining Lauryn Hill. Hard to beat a trifecta like that. That’s decades of Highlife, African funk and R&B chops baked into his singing and guitar licks.

He now helms a sleek, funky mothership called Super Yamba — the Brooklyn-based afro-funk orchestra that keeps NYC sumptuously funky across the boroughs and in every season. This was the band that really got the party started at the Barbès in the Woods festival this year in Montague.

They are AMPED to be back in Franklin County for a lil’ end of the year Collider! party. Yamba will play two luxurious sets with infectious dance interludes before, between and after courtesy of the Peace & Rhythm crew.

“Kaleta’s James Brown grunts have got to be some of the best in the business.” -Afropop Worldwide