Joe Belmont and Wanda Houston at Hawks and Reed 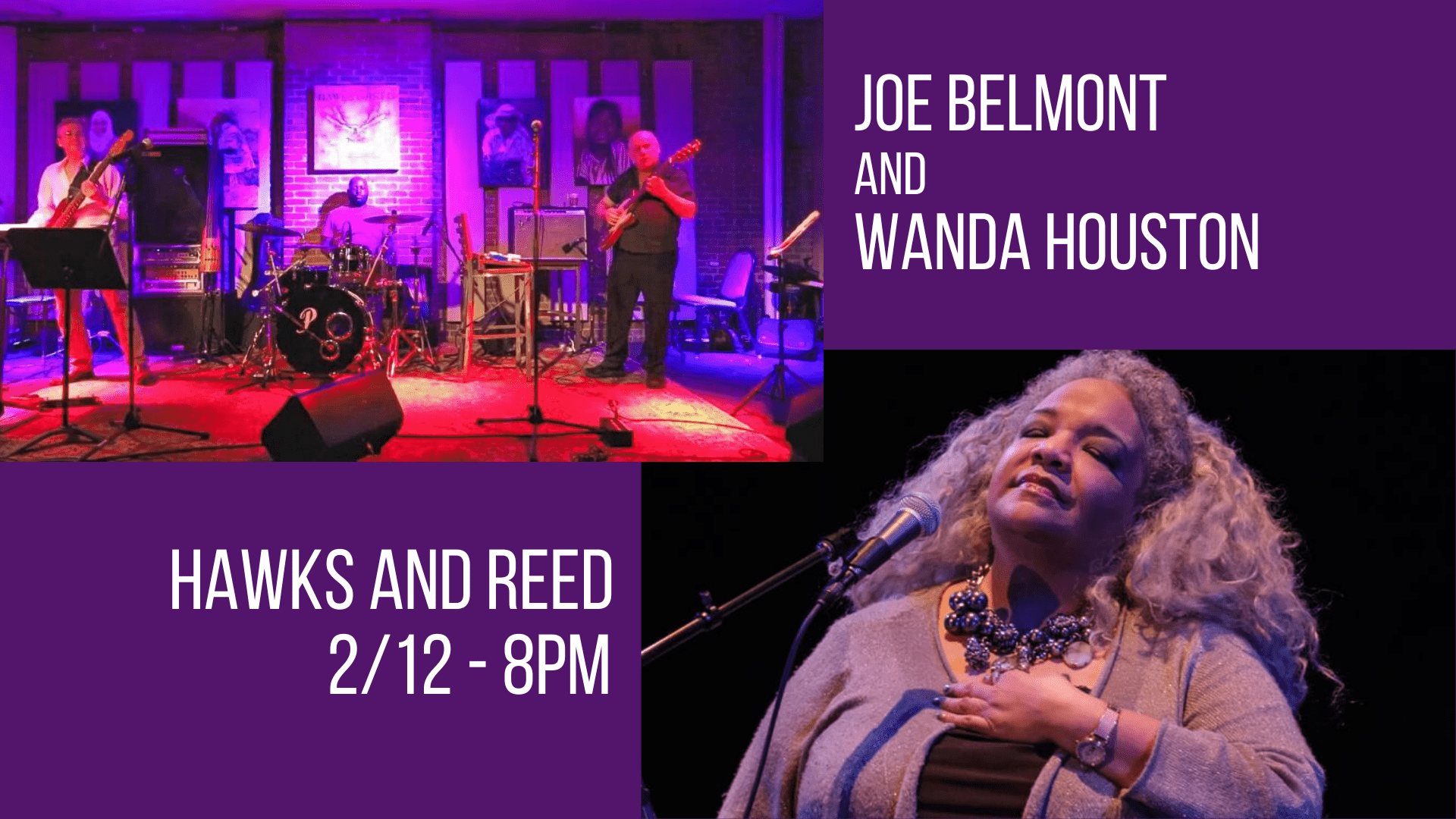 Joe was born in New York City. After dabbling with other less worthy instruments, he found his passion in the guitar. He taught himself to play and began writing songs almost immediately. Soon after, he formed long-standing and popular NYC band, Charlie Quasar, with his bro Dave Belmont, bassist Jerry McCord and drummer Ritchie Epstein. Toward the end of the band’s tenure, Joe began music school, studying at the City University of New York, and receiving a BA in 1977.

After graduating, Mr. Belmont disappeared into the hinterlands of Western Massachusetts, having fallen off the edge of the flat earth, as defined by The Map in New Yorker magazine. Actually he settled in Northampton, MA.

Joe immersed himself in the music scene there, playing a dizzying variety of styles, with numerous bands. Memorable were stints in the rhythm and blues band “The Hamptones”, singer-songwriters John Coster and Joel Zoss, and jazz-fusion bands Urban Renewal and Fresh Squeeze. In 1986 he released a cassette(!) of his acoustic guitar compositions entitled “First Edition”, which became a local best-seller.

Since 1990 he has taught Jazz guitar as a performance instructor at Amherst College, Amherst, Massachusetts. Joe played guitar, arranged and wrote music for the band Quetzal (Viva Quetzal.com) from 1991 thru 2003, recording three CD’s and traveled to numerous shows at festivals, Fine Arts Centers, and other venues all over the USA.

In 2003 Joe began his solo career, first releasing the CD “Sketches from the Journey Home.” “Sketches” is a collection of intimate guitar pieces, each depicting an aspect of Joe’s life. (Read a review here. Listen to MP3s here.) Following this CD, Joe recorded another entitled “Live at Leeds (Northampton),” released in June of 2005. Joe then embarked on a two year project transcribing and learning the music of Wes Montgomery, and teamed with some wonderful musicians (Paul Arslanian on piano, Dave Shapiro on bass, Claire Arenius on drums, Bruce Diehl on saxophone) to produce the CD “Joe Belmont and the Fellowship of Wes,” released in 2007. In 2010 he released (along with flutist Sarah Swersey) the self-titled “Duo Fusion” CD (www.duo-fusion.com).

In 2013 he served as Music Director for the world premier of Grammy and Tony winners Steven Sater and Duncan Sheik’s play “Arms on Fire.” He is currently writing music and getting ready for The Joe Belmont Experience.

Wanda Houston is not only the lead vocalist for Heth, Bradley & Houston, the Wanda Houston Band and Big & Bigger, she also lends her talent to regional projects including the Convergence Progect, Mothership Trio, The VT Jazz Center Big Band and the NOLA inspired Rejuvenators.

For years, Houston sustained a bi-coastal career performing on stages with the likes of Barbara Streisand, Patti Austin, Joe Cocker, Celine Dion, Rick Astley and Sam Harris. A private scholarship in opera temporarily took her to USC where she prepared for the Met auditions. It was at this juncture she realized musical theater was her future.

Meanwhile, she toured with Motown legends Mary Wells, Martha and the Vandellas, and The Platters while performing with tribute band, The Marvelous Marvelettes. Later, she joined the cast of Michael Jackson’s production of Larry Harts “Sisterella!” and toured through Germany, Austria and Australia.

After the tours, she made the move to New York City in the cast of “A Good Swift Kick.” and was later cast in the New York company of “Menopause the Musical”. She was “Negro Woman” on Broadway in the Roundabout Theater production of “A Streetcar Named Desire” staring John C. Reilly and Natasha Richardson and was a soloist with the Broadway Inspirational Voices who received a Grammy nomination for its Christmas album, “Great Joy.”

Other NYC credits include the John Tuturro film “Romance and Cigarettes” and featured soloist in RCA’s recording of William Finn’s, “Infinite Joy”.